The plan was simple, load up the bike, fill the tank with diesel and head for the continent. Catch the dieselbike rally in Bavaria, visit the ‘Eagles Nest’ (Hitlers mountain top retreat);roll over the Großglockner and Stelvio passes and catch the classic hillclimb event as Gaschney before heading back for home.

Heading out on the 2nd July and an easy 70 odd miles to Dover to catch the 06:10 ferry, (yes it was a very early start). Suffer the free coffee in the premier lounge away from the riff-raff thanks to the use of Tesco vouchers and their 3x purchasing power. 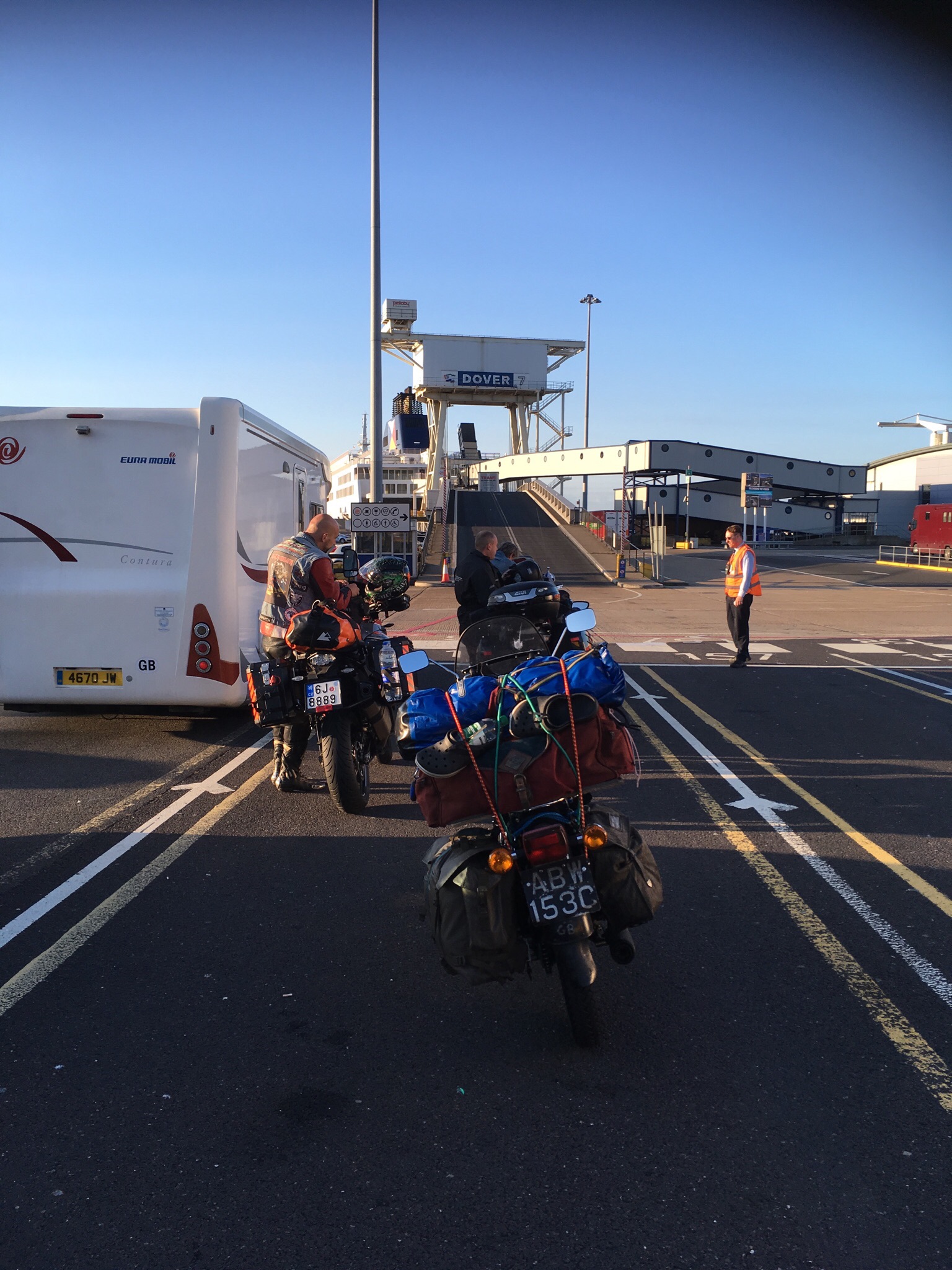 Off at Calais and an easy 200 miles of winding roads French countryside to a campsite in Epernay where Stu (NC700), is already set up having taken a night boat from Newhaven. An evening spent catching up on each other’s news with a few beers thrown in for good measure. 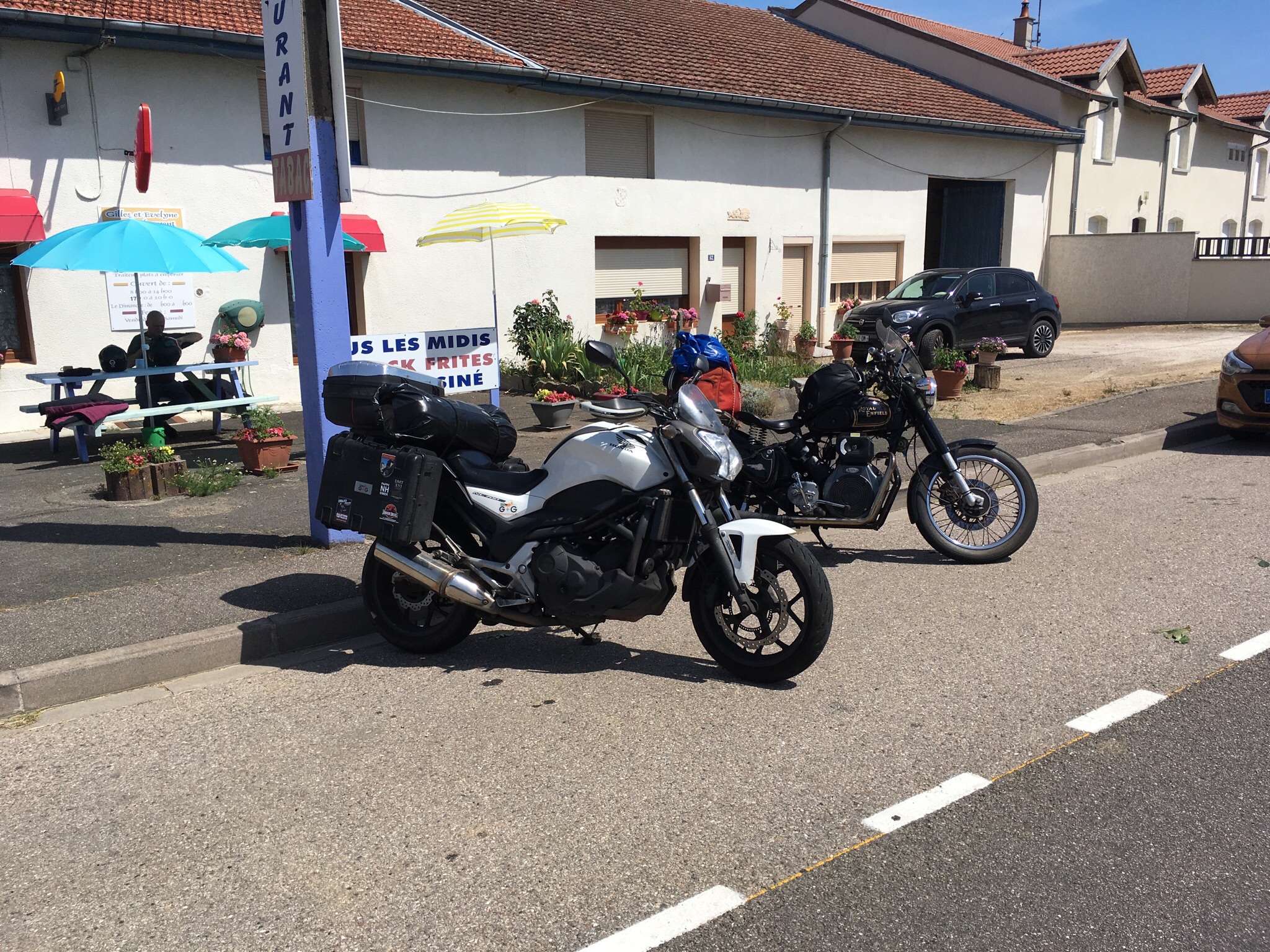 Next day we head for Germany and check in at a tiny campsite in the Black Forrest we have used before - here we meet Alex the mad Dutchman (600 Honda Shadow). We get eaten by mosquitoes and retire to mesh guarded tent interiors early. 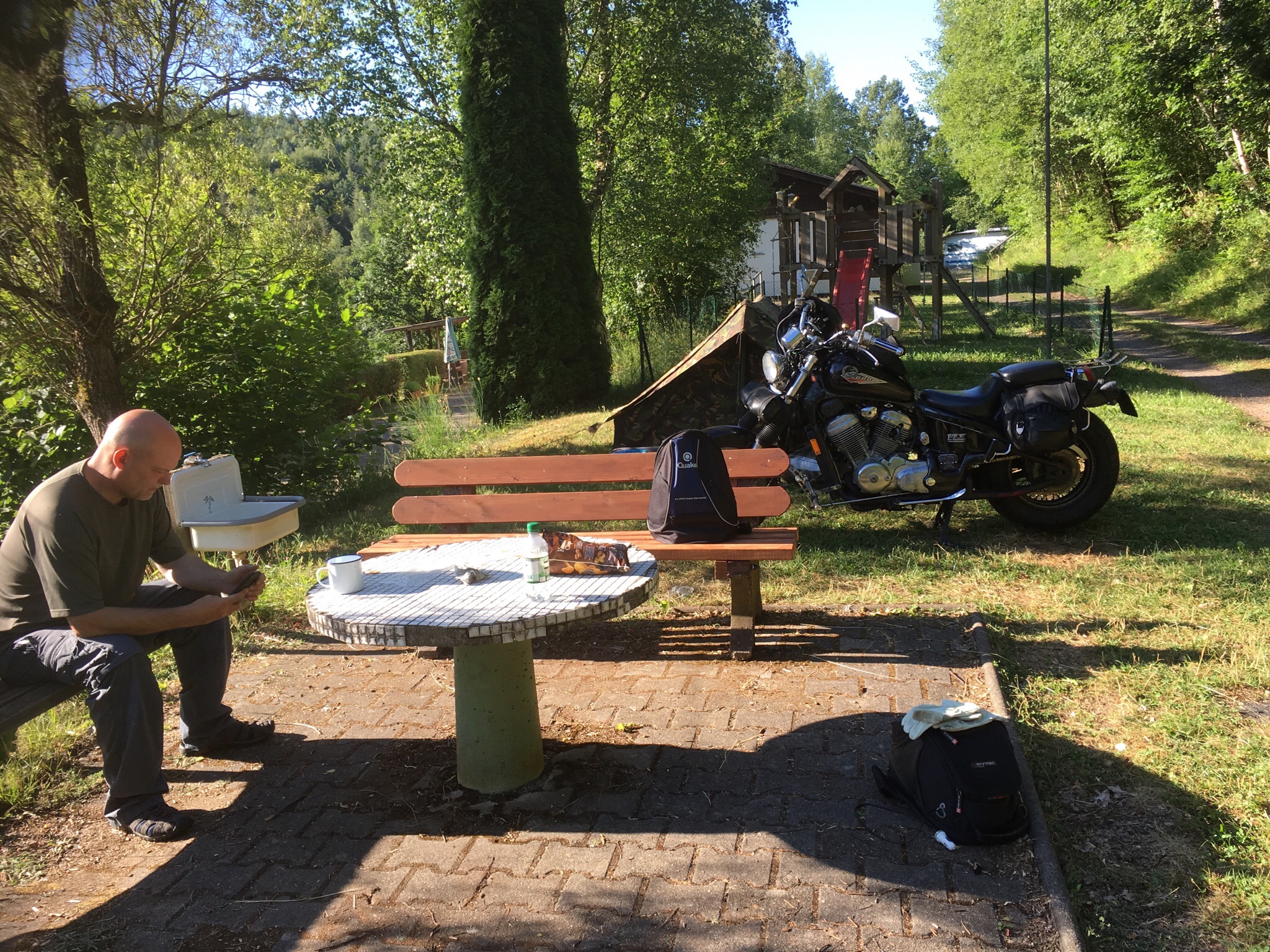 The next day we arrive at Bergen for the dieselbike Rally, an easy 190 miles of winding roads and as the first to arrive we have first pickings of pitches for camping. The event was a chance to catch up with old friends and meet some new ones, Alex did attempt to out-drink the local Fire Brigade and it was declared a draw although he was none to chipper the following day. 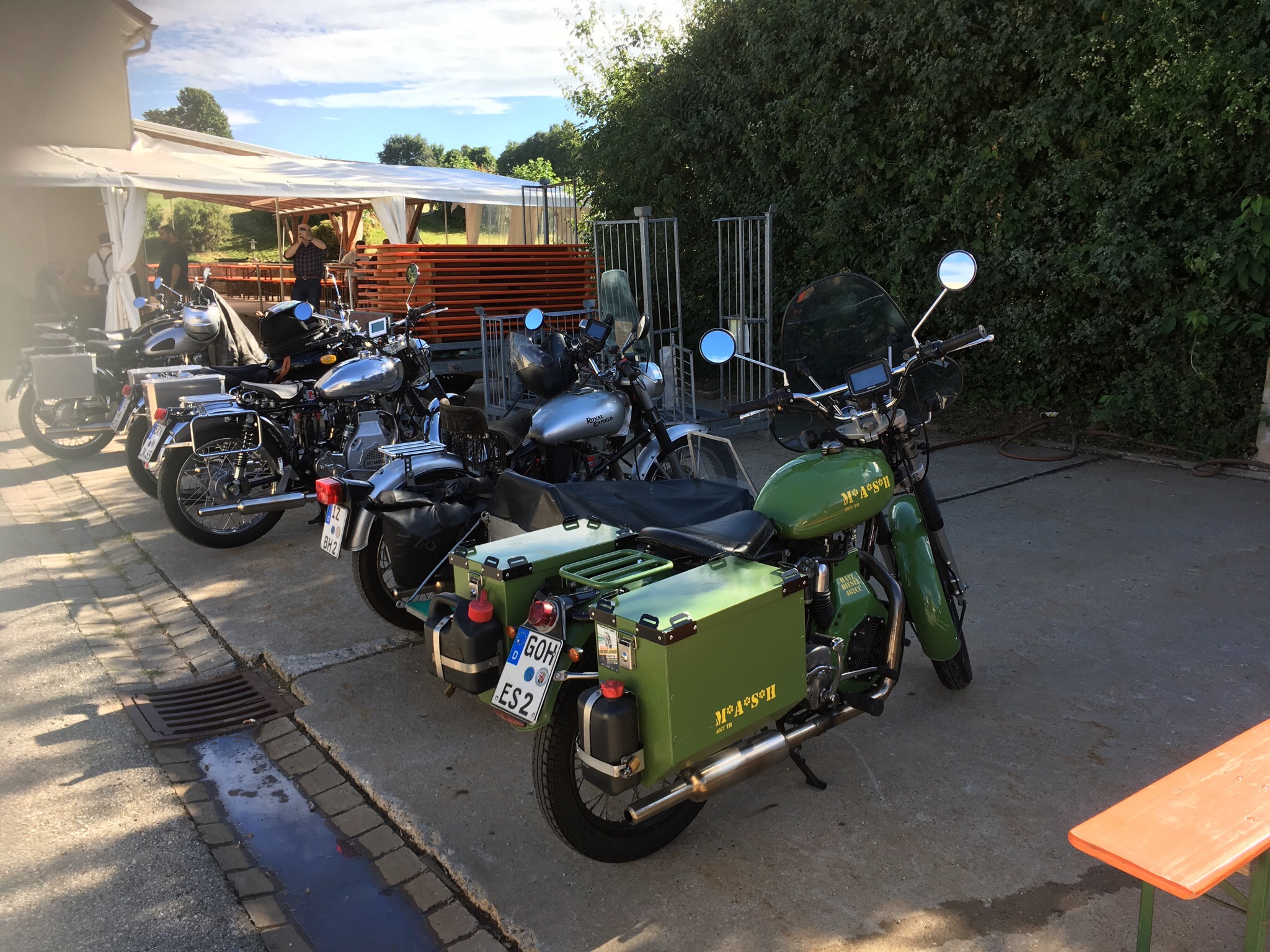 We stay for a few days then head off on Sunday to Berchtesgaden, as the following day we wanted to see Hitlers ‘Eagles Nest’ retreat. It’s a bus ride to the top (not a cheap one either), followed by a lift then steps. What a swizz, the original building had been blown up by the RAF and it was in the clouds so couldn’t see a thing. After an hour we descended and rode to a campsite across the Austrian border at Zell Am See. 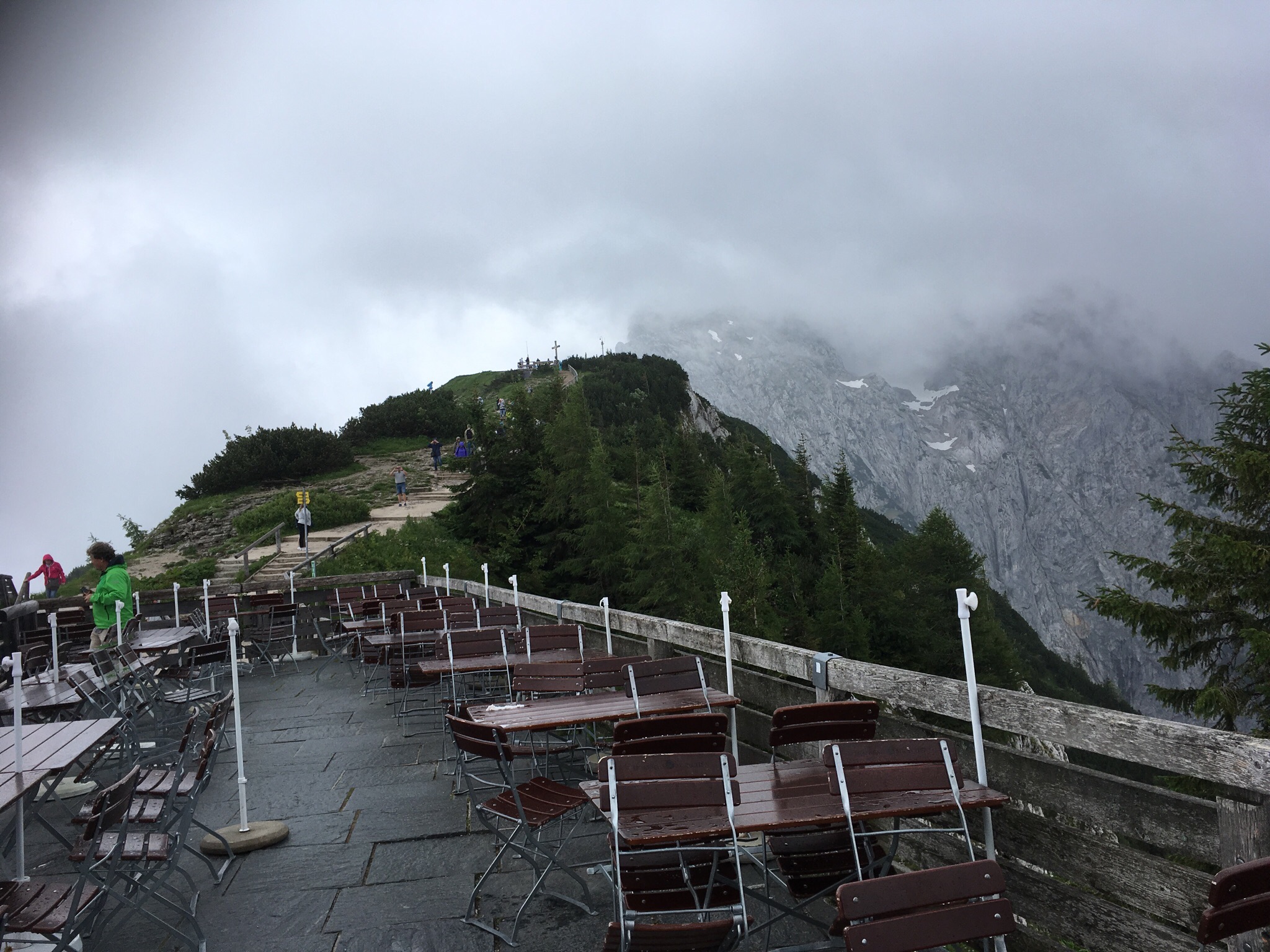 Tuesday - time to start conquering the passes. The Großglockner is I believe the highest paved pass in Europe, it certainly felt that way and the diesel Enfield smoked it way to the top bathed in clouds and a full 360 degree view of.....the inside of a cloud. Be aware if you choose to do this ride it costs over 26 Euro for the entry fee. We descend and make our way to Italy for the start of the Stelvio Pass and find a campsite just at the foot so we have a full day’s riding tomorrow. 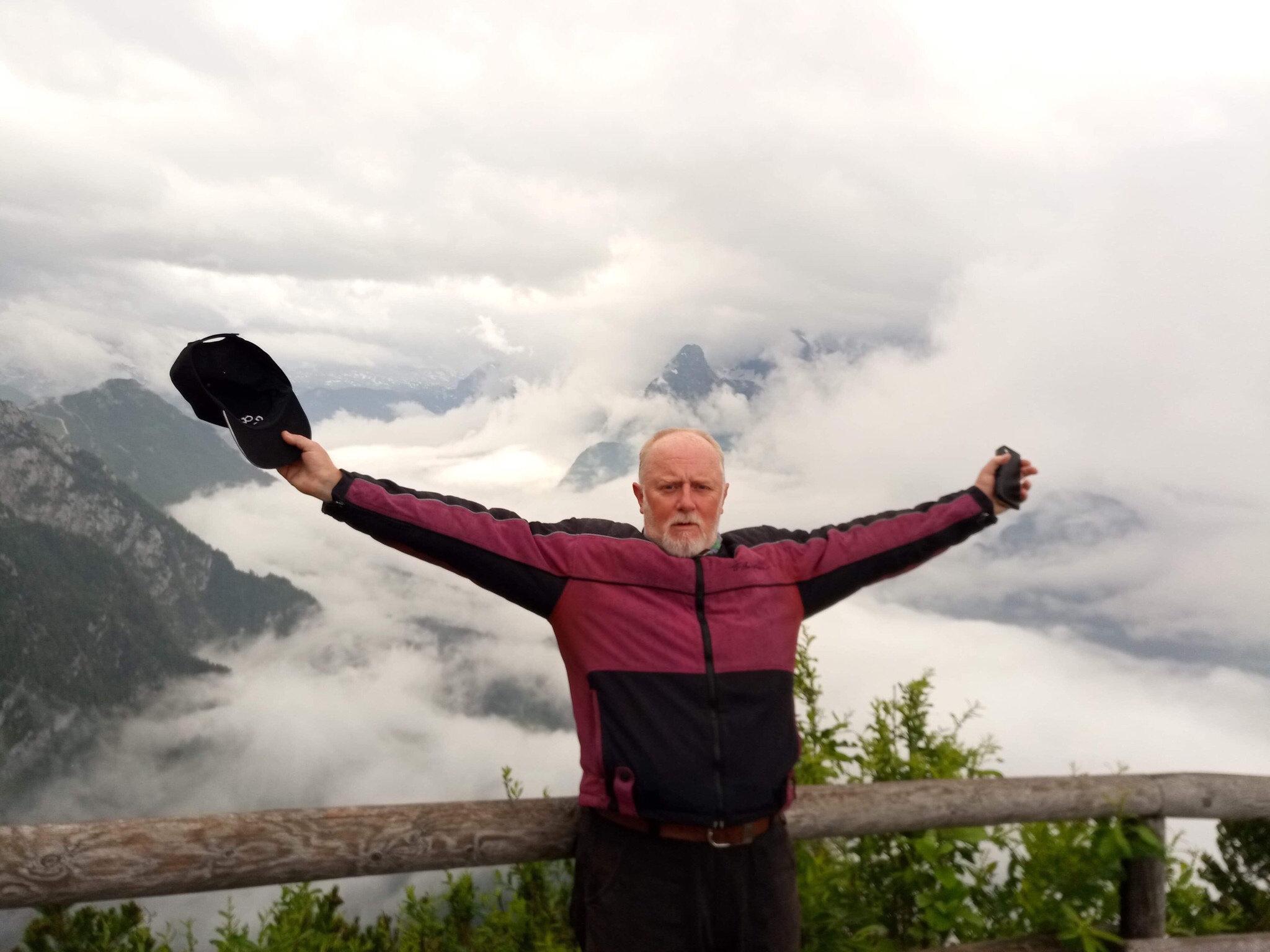 Weds and the Stelvio beckons and at last the clouds dissipate so we climb in glorious sunshine to the summit where the snow remains all year long. A swift coffee and a chance to buy some tourist tat at the top and we then descend on the not so sunny side where the temperature is decidedly cooler. A stop off to see the glacier only demonstrates how much global warming has impacted the environment - there is very little left. We crossed into Switzerland via the longest and coldest tunnel I have ever experienced, through Zurich at evening rush hour and 35 degree heat. 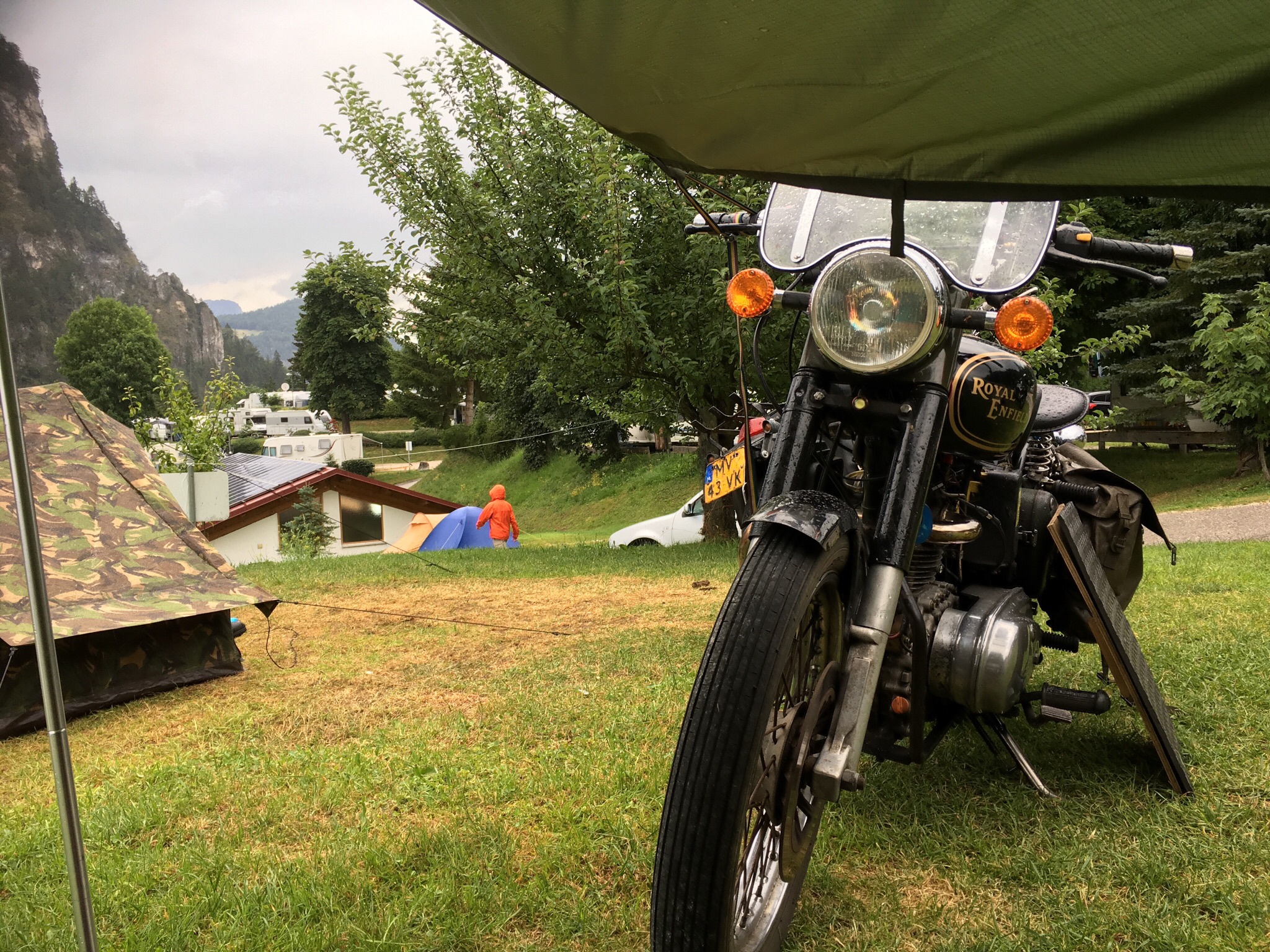 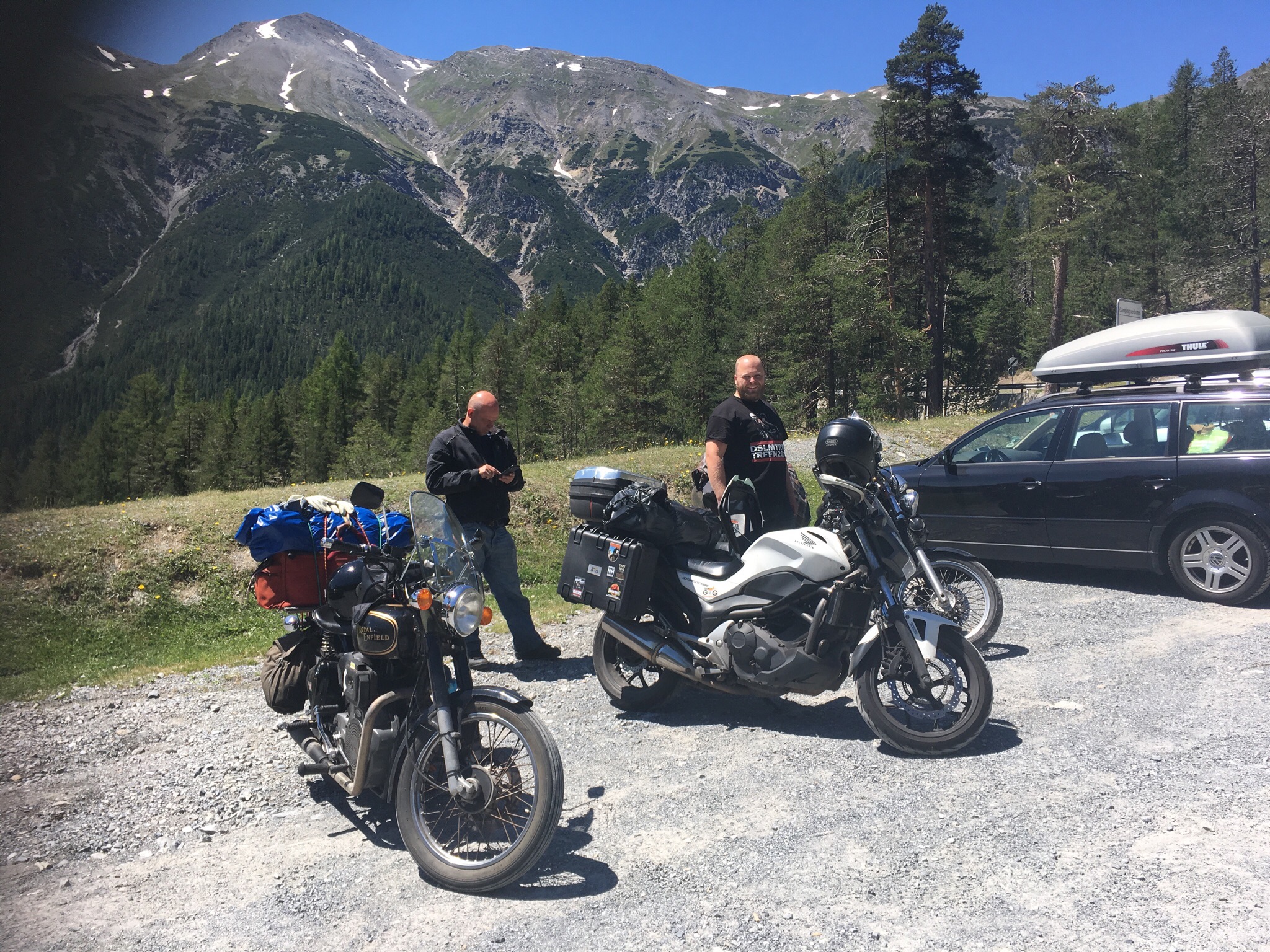 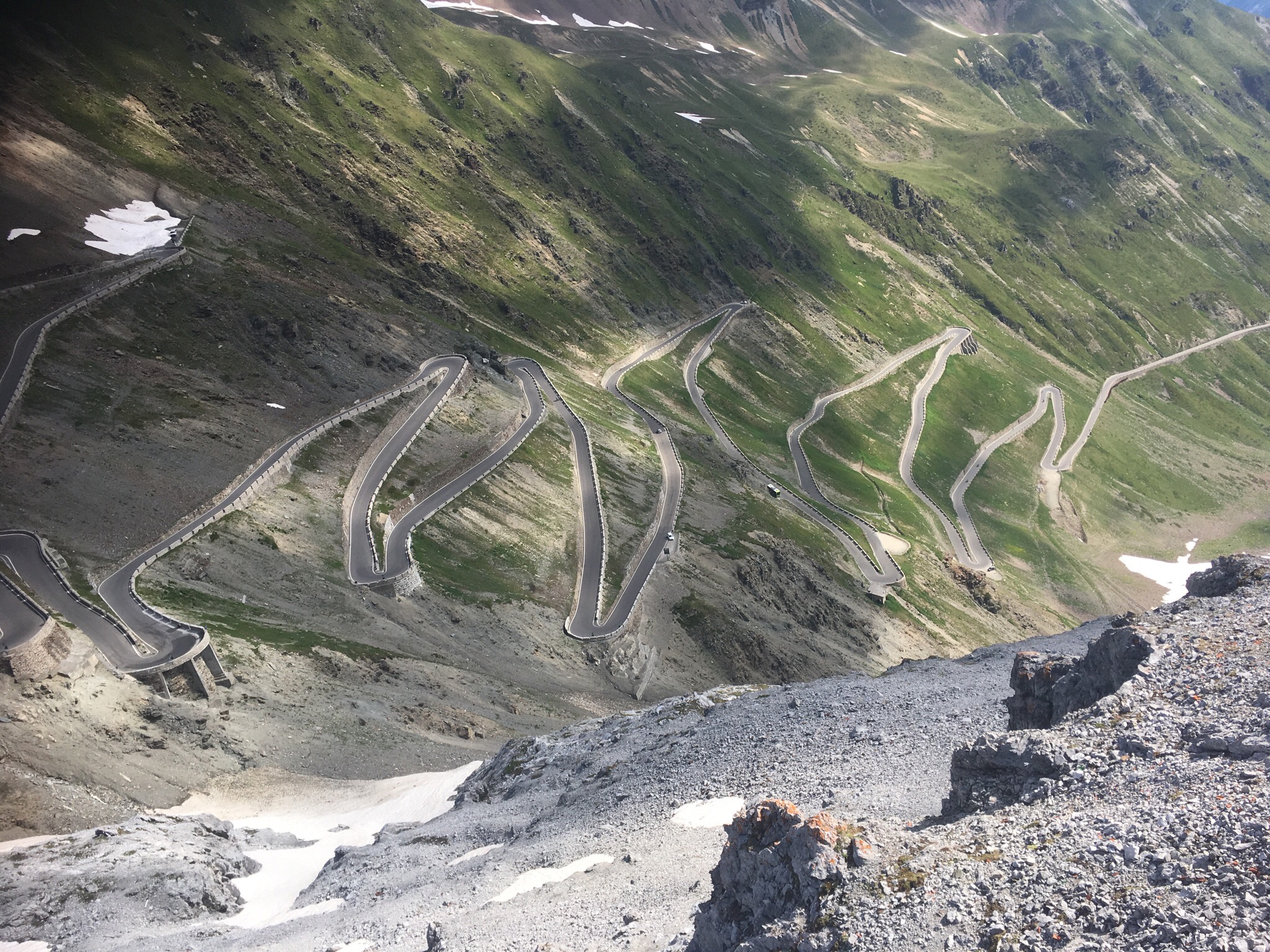 Just before exiting Switzerland the front tyre blew out and I hit the deck hard; the left footpeg snapped off and I cracked a rib landing on it, my Kevlar jeans saved my bacon but I still had a bruise running from hip to knee and a busted visor on my helmet. With help from locals and my riding buddies the bike was dragged off the road; the tyre fixed and a tyre lever zip-tied in place as a temporary footpeg. At this point I decided it best to head directly for our weekend destination even though it was over 100 miles away. I knew that although i was in pain, it would be a lot worse the following day, and the thought of needing to pack up tent and camping gear and then ride would be impossible to do.

We arrived late, after 10pm, but the weather was fine and we managed to set up in the dry in a choice position as we were the first to arrive. We then spent the next 4 days without needing to use the bikes apart from the odd shopping trip so I had time to rest and heal. We are joined by Andre with his Enfield Centaurus diesel, Jeff with the Ruggerfield (950cc Ruggerini powered Enfield, and the two Swiss dieselbike club members riding Sommer Hatz powered diesel Enfields. Andre brings a new footpeg and even fits it for me; Rudy brings a new visor for my helmet and so my birthday passes and I grow a year older overnight. 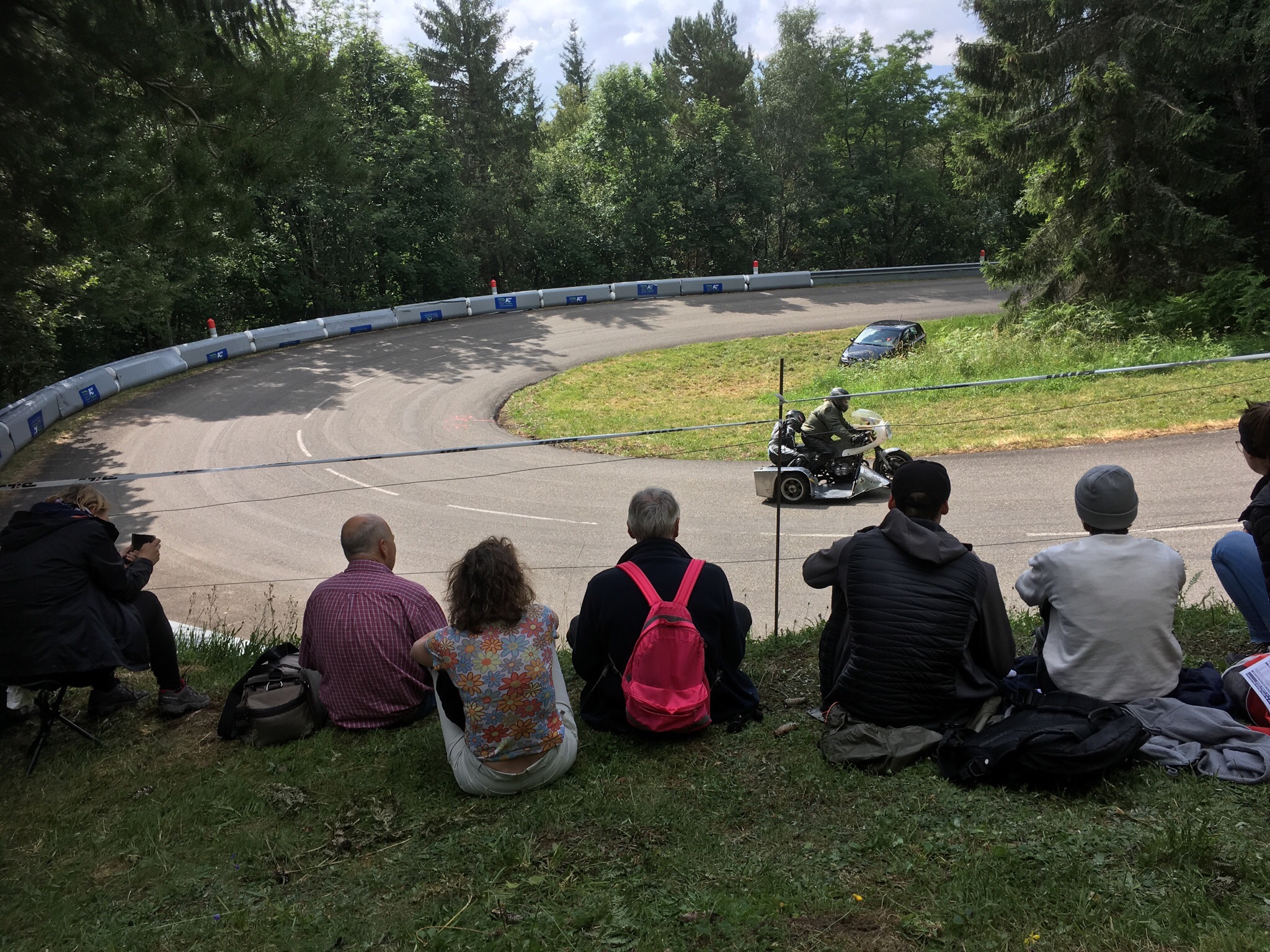 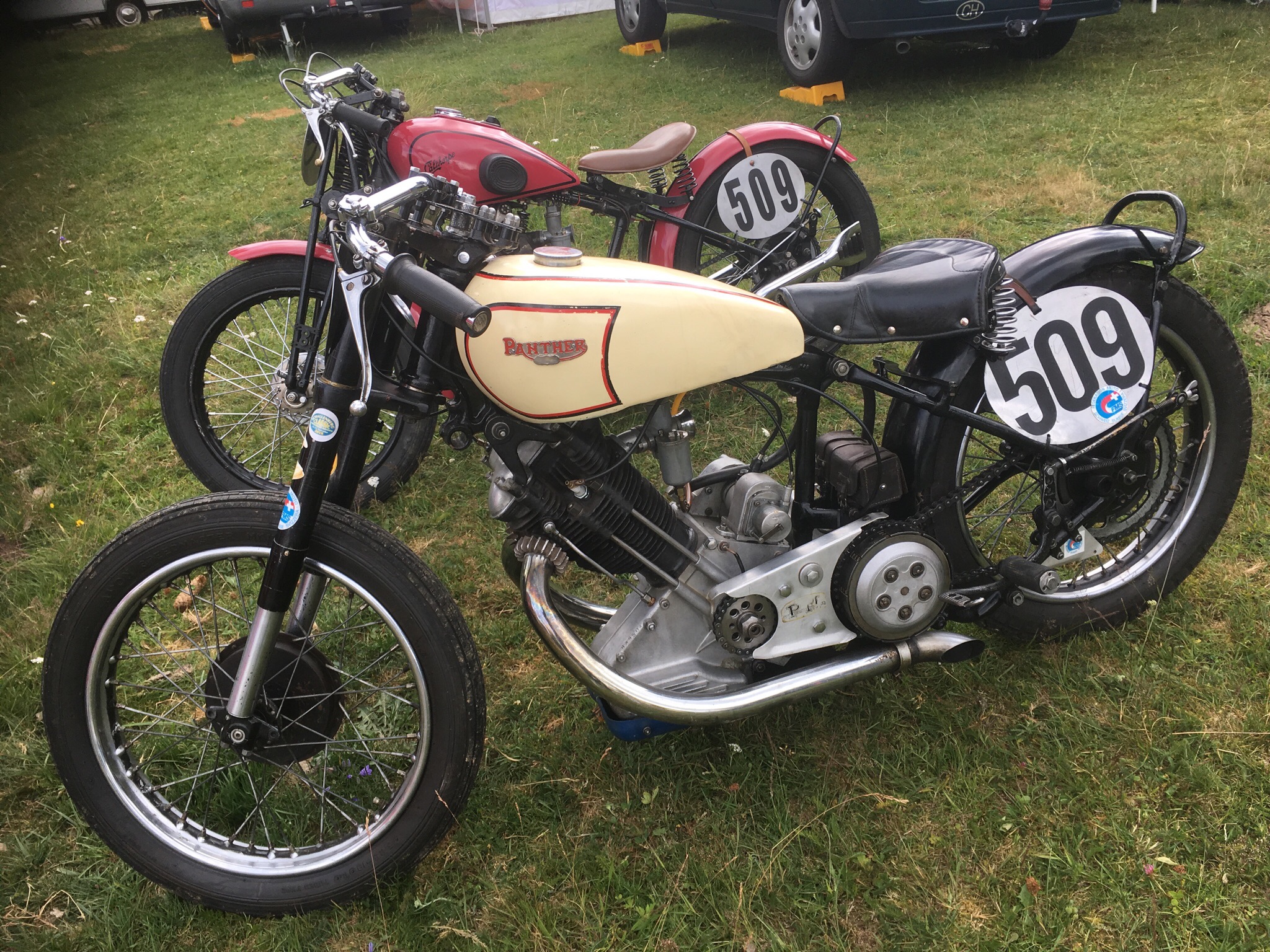 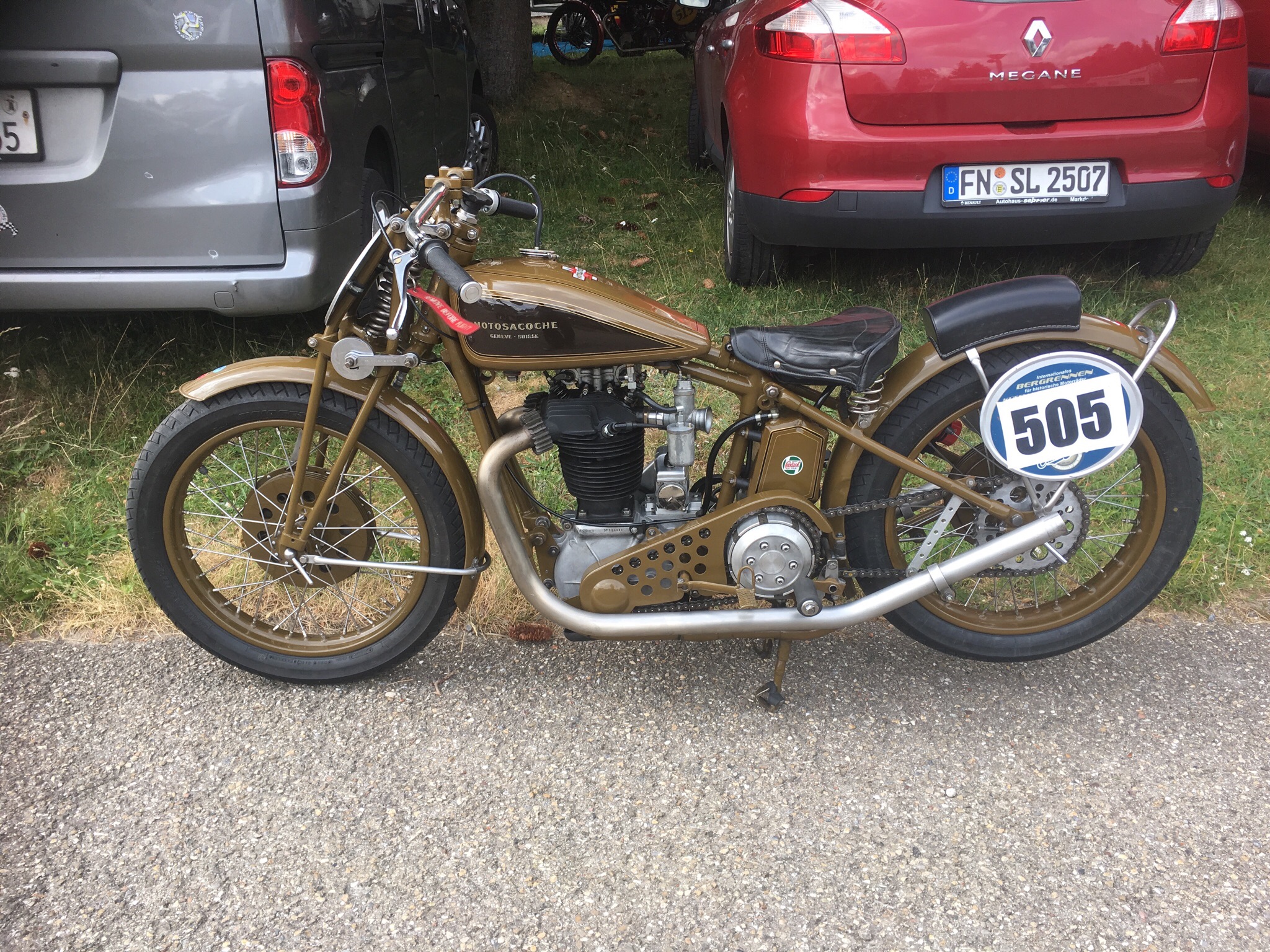 The racing is a great spectator sport, you need to choose your position on the track carefully and ours was a prime position on the final hairpin. We have our very own dieselbike entry and Andre managed a couple of practice runs in the dry on Saturday. Sunday proved to be very wet and we saw the serious contenders pushing very hard on full wet tyres and coming into the pits shaking heads and hands.

Monday we pack up camp and have our last group breakfast of cheese omelettes at the restaurant, we say goodbye to our Swiss, Dutch and German friends and the 3 Brits head for home. We take it easy and find a perfect little village campsite in Autry and even spot a Beaver (no sniggering at the back) in a field next to the river. 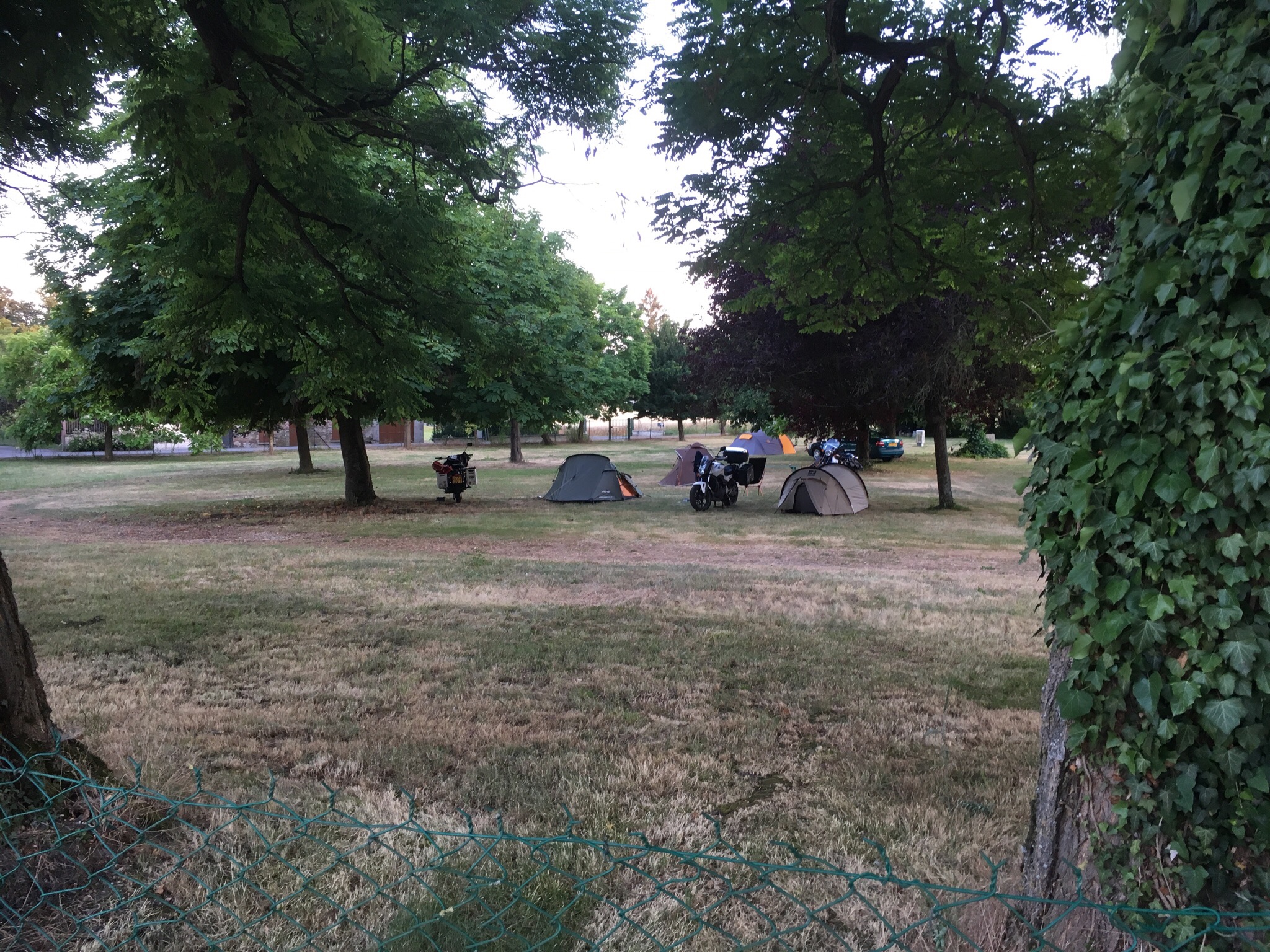 The following day we reach Peronne and after buying half the supermarket we settle down for the evening the lads head into town for beer and atmosphere, I’m still a bit to damaged to join in and so spend the time quietly catching up on my audiobooks. 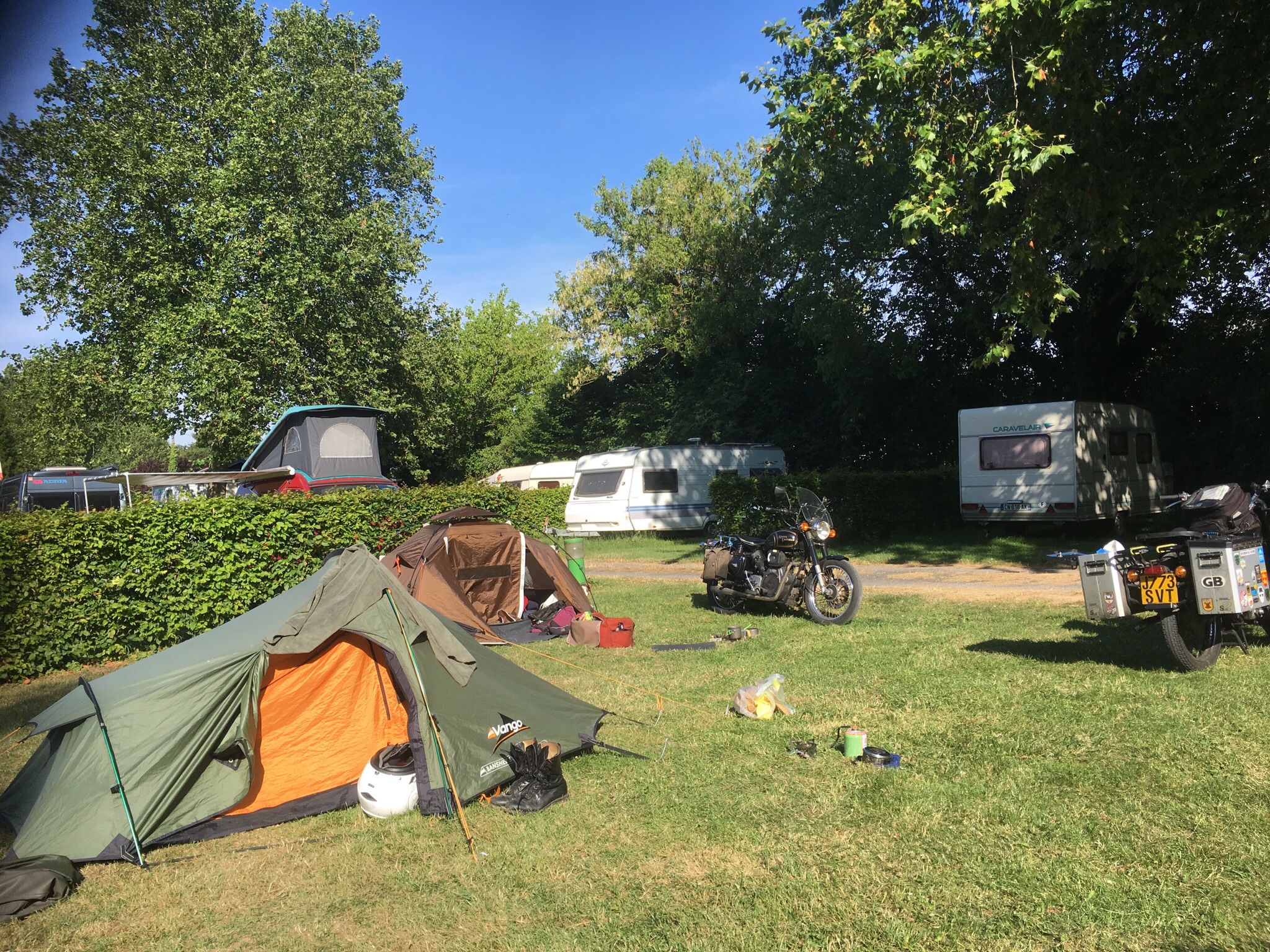 Weds dawns bright and allows the tent to dry off before packing up, I head for Calais and manage to catch an earlier boat than planned. The M20 however is a disgrace and so I arrive home hot and frustrated, I turn off the bike and Brenda presents me with a very welcome cup of tea; home safe.
Top

Good write up Dave, what a pity having a front wheel blow out, any idea why, hope the rib is less painful now. Great photos and a good planned route.
Top

It often is, Dave, it often is.

Great write up, and I hope the bruises are now just memory.

Sounds a great trip (apart from the off), hope the rib and bruises healing. Plans always start simple.....

Nice write up Dave and piccies. I've been banned from foreign trips this year

Great write up Dave many thanks, hope the body is now ok.
Top

Great read and pictures DD.Sounds like a very good trip.
Sorry about your off .Hope are improving now.
Top

+1 on all the above comments.

Nicely written and great pics TY for taking the time to share.
I love the sharing tours with friends in Europe
Sorry to hear about the off mind
Top

Thanks for the upbeat comments chaps, healing rapidly as I tend to do.

I wasn’t the only one to suffer tyre problems, Stu picked up a drywall screw that went through the main tread and out through the sidewall several times - this meant a 20 kilometre trip in a recovery truck for him and we put on a new tyre at the Dieselbike event. 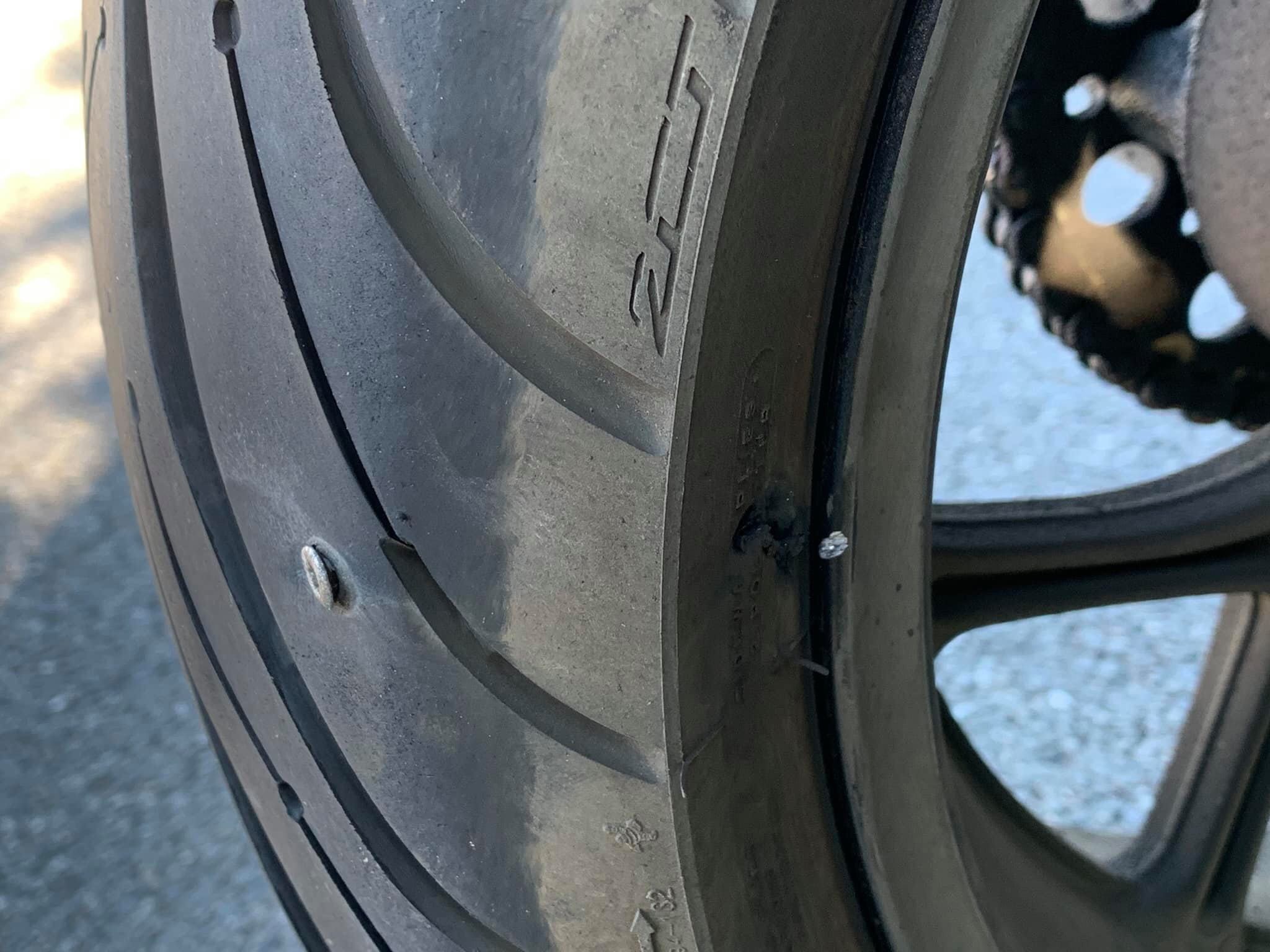 No amount of plugs would seal that bugger up. 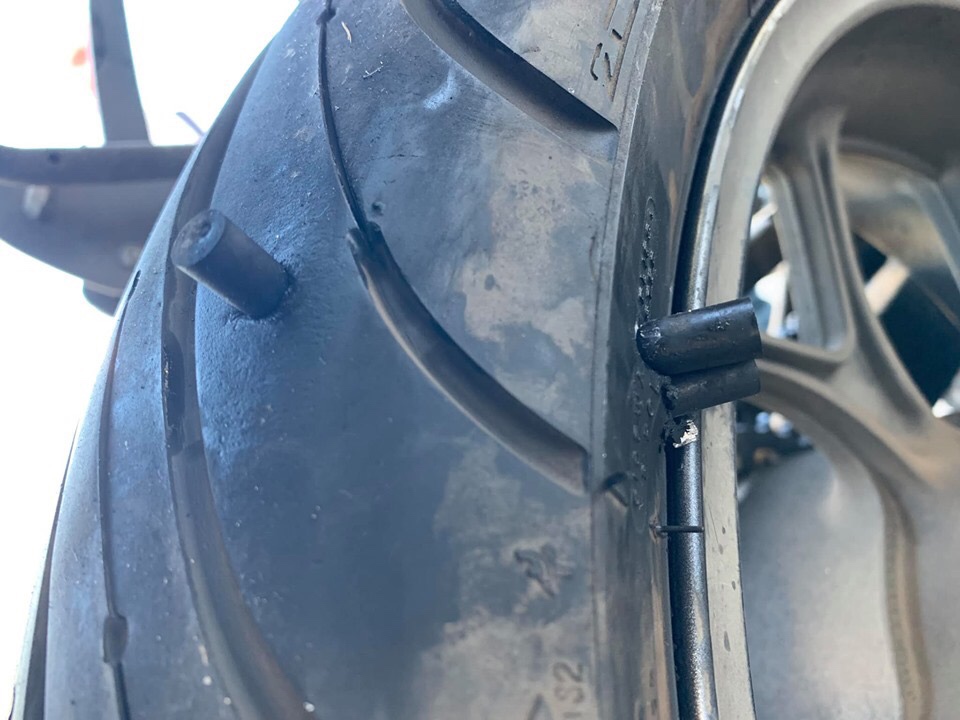